Focus: The main water quality concern in this watershed is the elevated levels of nitrates which contribute to hypoxia in the Gulf of Mexico. This concern is currently being addressed through the voluntary use of in-field, riparian and in-stream BMP’s, such as the two-stage drainage ditch design.

The Cedar River HUC 8 watershed is located in the Lower Mississippi River Basin along the border of Iowa (Figure 1). Only approximately 40% of the watershed is contained within Minnesota, the remainder is within the state of Iowa. The watershed is characterized by two biomes: deciduous forest and prairie grassland. It is also highly agricultural with extensive drainage and with nearly 74% of the land use as corn and soybean row crops. Impervious surfaces within the watershed are centered in the city of Austin (Figure 2). 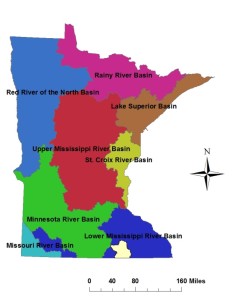 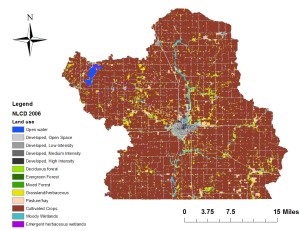 Figure 2: Land use and the city of Austin within the Cedar River HUC 8 watershed.

The Mullenbach two-stage drainage ditch site (Figure 3) is located in rural Mower County in southern Minnesota, USA, approximately 8 km southwest of the town of Adams, MN, and 10 km south-southeast of the town of Rose Creek, MN. The ditch is located in the headwaters of the Little Cedar River within the Upper Cedar River watershed (8-digit HUC: 07080201). The Mullenbach ditch empties into the Little Cedar River approximately 4 km downstream of the constructed two-stage ditch reach, which then flows south into the state of Iowa (Figure 4). The watershed area is 12.6 km2 (3,102 acres) and land use is predominantly row crop agriculture, the main crops being corn and soybeans. The topography is nearly level. Soils in the area comprise mainly poorly drained silty sediment over glacial till and outwash, deposited, most likely, prior to the Illinoian glaciation. Total annual average precipitation in this region is 80 cm (31.5 in). 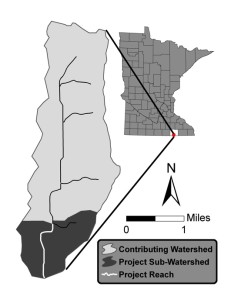 With funding and assistance from the Nature Conservancy and the Mower County SWCD, approximately one mile of the Mullenbach drainage ditch was converted to the two-stage design in October of 2009 (Figure 5).

With funding from the Minnesota Pollution Control Agency, the University of Minnesota has collected 5 years (2009 – 2013) of water quality and quantity data from the ditch, with emphasis on nitrates and flow. We have collected in-stream, tile, well and linear wetland data. This data includes as total of 104,654 continuous nitrate, flow, pH, conductivity, temperature and precipitation readings as well as 1,113 grab samples which includes the above types of data plus numerous other parameters including isotopes, phosphorus, metals and nitrous oxide gas.

Socio-Economic Factors: In 2009, the MPCA performed intensive sampling of the surface waters within the Cedar River Watershed as part of their WRAPS process. In 2014, Dobbins Creek, north of the Mullenbach watershed and just east of the city of Austin, became a watershed of focus in the Targeted Watershed Program initiated by BWSR in 2014. There has been much previous work in this watershed performed by the local watershed district (Cedar River), including SWAT modeling, which was completed in 2010. In 2011, the CRWD also conducted the Dobbins Creek Restoration Project in which the banks of the upper reaches of Dobbins Creek where graded and revegetated to stabilize eroding soils. The Mower County SWCD is very active in the Cedar River Watershed and works in conjunction with the CRWD on various management and restoration projects.