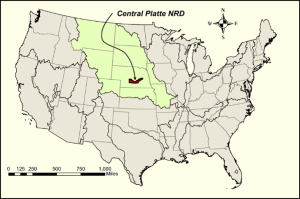 Nebraska has established 23 Natural Resources Districts (NRD) to manage the quality and quantity of groundwater. The NRDs have authority to regulate the use of groundwater and to implement policies and regulations to protect and improve water quality. They also develop many other resource enhancement programs such as tree planting. They are funded through property taxes. They also conduct research, training and educational programs.

This case study focuses on the Central Platte NRD located in the center of Nebraska (see map insert). The NRD consists of alluvial soils near the river that are often sandy or shallow silt loam soils over sandy subsoils. Away from the river the soils are primarily deep silt loam soils. Over one million acres of land are irrigated in the NRD (this represents about 1.8% of the irrigated land in the United States). The land has been irrigated since the 1950’s and 1960s. Original irrigation utilized furrow irrigation while today much of the land uses center pivot irrigation with a small amount of subsurface drip irrigation. Corn is the primary irrigated crop with significant portions of the land also using a corn-soybean rotation.

The NRD is also home to three migratory birds that have been listed as threatened or endangered species. Work has continued since the 1980’s to develop cooperative programs with the states of Wyoming and Colorado, and the US Fish and Wildlife Service to develop habitat enhancement programs. Some steps include the retirement of irrigated land to enhance flows at critical times in the Platte River, creation of constructed habitat more suited to species, and research to understand habitat needs. 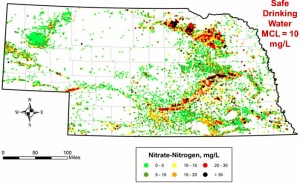 The NRD strives to manage water quantity and quality. Like most irrigated regions in the western US they are concerned with the sustainability of the irrigation economy under current conditions and into the future. They are also interested in the impact of climate and land use changes on the economy and the viability of ecosystems.

However, the issue focused on in this case study is the concentration of nitrate-nitrogen in the groundwater beneath the NRD. Excess application of nitrogen fertilizer and irrigation water over the decades has contributed to elevated levels of nitrate-nitrogen in the groundwater. Some areas have concentrations above 25 mg/L or parts per million (ppm) – see map insert. The maximum contaminate level for nitrate-nitrogen is 10. So, widespread areas in some portions of the state have levels above 10 ppm. This raises issues for public and private water supplies.

Programs have been conducted for a long time to develop procedures to reverse the buildup on nitrate-nitrogen in the aquifer and to lower the levels over time. The graph to the right shows the trends of the percentage of irrigation wells with nitrate concentrations above the specific level. Programs described below have led to decreasing trends, but much remains to be done to approach the MCL for nitrate.

The NRD has partnered with the University of Nebraska Extension and the Nebraska Department of Environmental Quality to address the problem. The NRD has fulfilled to regulatory and management phases of the program, UNL has conducted research and developed educational programs that are mandatory for irrigators, while the NDEQ provides certification programs. The team is large and membership and leadership have varied over time and continue to evolve.

Agricultural practices and BMPS studied for the case study are numerous and detailed. The general practices require the following:

Advances continue including practices such as precision fertilization, variable rate irrigation, use of monitors of crop nitrogen status, cover crops and continuous soil water monitoring. The only feasible way to reduce N levels is by pumping more N from the groundwater than leaches annually into the groundwater. This is a central tenet for improving groundwater quality.