The fifth Healthy Soils for Healthy Waters Symposium was held March 6th and 7th at the Conservation Tillage and Technology Conference in Ada, Ohio. Almost 900 crop consultants, producers, and subject experts were in attendance. The series is dedicated to a whole systems approach to agricultural land management. The objective is to optimize management for healthy soils, nutritious foods, clean water, and farm profits. This year we had experts speaking on building soil health, regenerative agriculture, healthy foods, precision nutrient management, and healthy waters.

Barry Fisher (Region Soil Health Team Leader, USDA-NRCS) kicked off the event by highlighting the benefits of no-till and cover crops on soil and illustrated how aggregate stability is improved in a no-till system.

David Montgomery (University of Washington) spoke on the importance of “Ditching the plow, Covering Up, and Growing Diversity.” David’s books include Dirt: The Erosion of Civilization, The Hidden Half of Nature, and Growing a Revolution: Bringing the Soil Back to Life. In Growing a Revolution, David consulted many innovative producers across the world who are regenerating their soils and protecting the environment while maintain profitability. David Brandt (Ohio producer) joined him onstage in describing practices he is using on his own farm in Ohio and the benefits he has seen from using cover crops and no-till including reducing his use of inputs (fertilizers and herbicides). 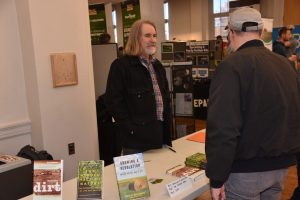 David Montgomery showcasing his books: Growing a Revolution, Dirt, and The Hidden Half of Nature.

We discussed sustainable agriculture’s impact on nutrient content and quality of crops. Larry Clemens (The Nature Conservancy), Marco Ugarte (MillerCoors), and Bill Knapke (Cooper Farms) presented on this including the environmental impacts of agriculture and how to promote good practices to producers.

During the Healthy Waters session, we had a lively panel of experts on their experience with earthworms. Frank Gibbs (NRCS), Doug Smith (ARS), Mark Williams (ARS), Merrin Macrae (University of Waterloo), Eileen Kladivko (Purdue), and Jim Hoorman (NRCS) discussed the benefits of earthworms and biopores while addressing any issues that may arise including nutrient drainage to tiles.

Recordings of all sessions are available on the CTC website.